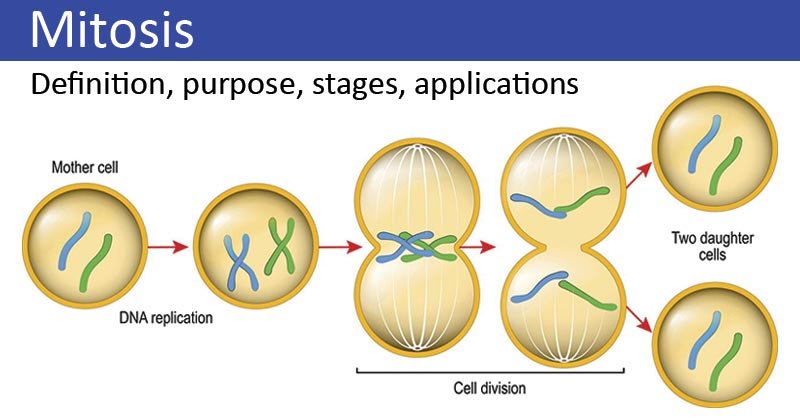 Mitosis is a process of cell duplication or reproduction, during which one cell gives rise to two genetically identical daughter cells. Strictly applied, the term mitosis is used to describe the duplication and distribution of chromosomes, the structures that carry genetic information. Following is a brief treatment of mitosis. For full treatment, see Growth: In Cells; cell: mitosis and cytokinesis.

Before the onset of mitosis, the chromosomes have replicated and the proteins that will form the mitotic spindle have been synthesized. Mitosis begins in the prophase with the thickening and coiling of the chromosomes. The nucleolus, a rounded structure, shrinks and disappears. The end of the prophase is marked by the beginning of the organization of a group of fibres to form a spindle and the disintegration of the nuclear membrane.

The chromosomes, each of which is a double structure consisting of duplicated chromatids, line up along the midline of the cell at metaphase. In anaphase, each pair of chromatids separates into two identical chromosomes that are pulled to opposite ends of the cell by spindle fibres. During telophase, the chromosomes begin to decondense, the spindle breaks, and the nuclear membranes and nucleoli reform.

The cytoplasm of the parent cell divides to form two daughter cells, each containing the same number and type of chromosomes as the parent cell. The stage, or phase, after the completion of mitosis is called interphase. Mitosis is absolutely essential for life because it provides new cells for growth and for the replacement of worn-out cells. Mitosis can last minutes or hours, depending on the type of cells and species of organisms. It is influenced by time of day, temperature and chemicals. 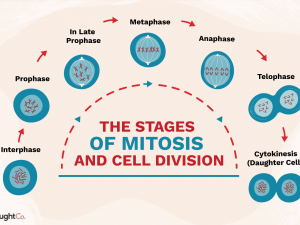 You can remember the order of the phases with the famous mnemonic: [Please] Pee on the MAT. But don’t get too hung up on names: the most important thing to understand is what happens at each stage and why it’s important for chromosome division. This animal cell has also made a copy of its centrosome, an organelle that will play a key role in orchestrating mitosis, so there are two centrosomes. (Plant cells generally do not have centrosomes with centrioles, but do have a different type of microtubule-organizing centre that plays a similar role.)

In the early prophase, the cell begins to break down some structures and build others, setting the stage for chromosome division.

At metaphase, the spindle has captured all the chromosomes and lined them up in the centre of the cell, ready to divide.

Before entering anaphase, the cell will check that all chromosomes are at the metaphase plate with their kinetochores properly attached to microtubules. This is called the spindle checkpoint, and it helps ensure that the sister chromatids divide evenly between the two daughter cells when they separate in the next step. If a chromosome is not properly aligned or attached, the cell will stop dividing until the problem is fixed.

In anaphase, the sister chromatids separate and are drawn to opposite ends of the cell.

All of these processes are driven by motor proteins, molecular machines that can “walk” along microtubule tracks and carry a load. In mitosis, motor proteins carry chromosomes or other microtubules as they walk.

In telophase, the cell almost finishes dividing and begins to reestablish its normal structures as cytokinesis (a division of cell contents) takes place.

Cytokinesis, the division of the cytoplasm to form two new cells, overlaps with the final stages of mitosis. It can start at anaphase or telophase, depending on the cell, and ends shortly after telophase. In animal cells, cytokinesis is contractile, pinching the cell in two like a purse with a string. The “cord” is a band of filaments made of a protein called actin, and the pinch fold is known as the cleavage furrow.

Plant cells cannot divide like this because they have a cell wall and it is too rigid. Instead, a structure called a cell plate forms in the middle of the cell, dividing it into two daughter cells separated by a new wall. When cytokinesis ends, we end up with two new cells, each with a complete set of chromosomes identical to those of the parent cell. The daughter cells can now start their own cellular “lives” and, depending on what they decide to be when they grow up, they can undergo mitosis themselves, repeating the cycle.